The City of Temples

Kingdom of Cambodia has been very famous to the world due to its rich culture, history and traditions. The country is called the Land of Temples and Towers due to the abundance of these magnificent wat/temples which are scattered all over the land. The most popular of these temples is the Angkor Wat which is in the centre of the Cambodian geography. Angkor Wat is located in Siem Reap. Due to this, Siem Reap has been claimed the world’s fourth best city for tourists by TripAdvisor’s Traveler’s Choice Award for 2014. Since I was in Cambodia, so, I never miss going there and besides most travelers traveled to this country to see the well-known wat/ temple.

I stayed in Putheavatei Boutique Hotel and Spa which was located just 5 minutes from the Angkor Wat. I woke up early and have arranged a one-day tour with the hotel’s tuktuk service. The plan was to explore all the wonderful temples in Siem Reap and we even talked about going to Banteay Srei and Banteay Samre which were an hour ride from the centre of Siem Reap. First, I had breakfast and then headed to the itinerary of the day. When we got there, there were tons of tourists. Buses parked here and there. Queues were long to get an Angkor Pass. Of course, it should be long. Angkor Wat is one of UNESCO’s world heritage sites. So, I followed the queue and it was actually fast. Within 2 minutes, I was already in the counter. For Angkor Pass, it was for USD20. Yes, it is expensive but you can visit all the temples just present this pass and the payment will also help in maintaining and restoring the temples. The pass is non-transferable. They will take picture of you and have it printed in your pass just like this.

So, with the ticket with me and riding the tuktuk, the journey started. We first went to the prominent temple, Angkor Wat. As advised by most people and even the tuktuk driver, it is better to come to Angkor Wat during the afternoon to fully see the great view of the temples. It is due to the direction of the sun rays that you can’t really admire it during the morning. Too shame, I could only take these photos. But it was really magnificent. I spent about an hour roaming around the temple. Too bad, I didn’t hire any tour guide but even though I only knew a little what this temple has gone through for years, I could say that it made wonders in the world and put Cambodia in the map as well as Hinduism and Buddhism as a big-name religions of the past. I can still remember from my Asian Civilization class during my secondary years at school that Angkor Wat is the largest Hinduism temple complex in the world. It has become a symbol of Cambodia as it appears in their national flag.

On the way to Angkor Wat

Inside the Angkor Wat grounds

Monkeys on the roof 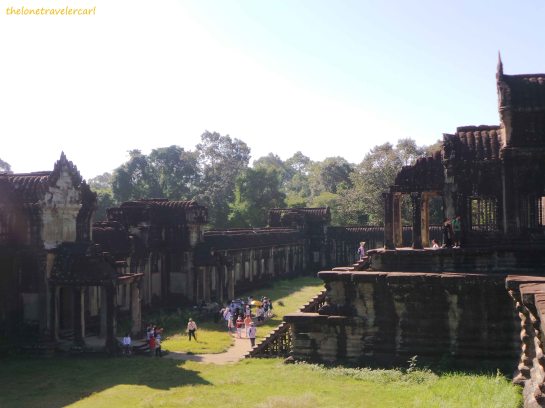 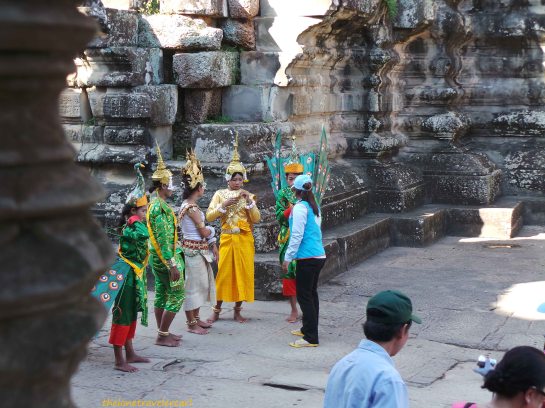 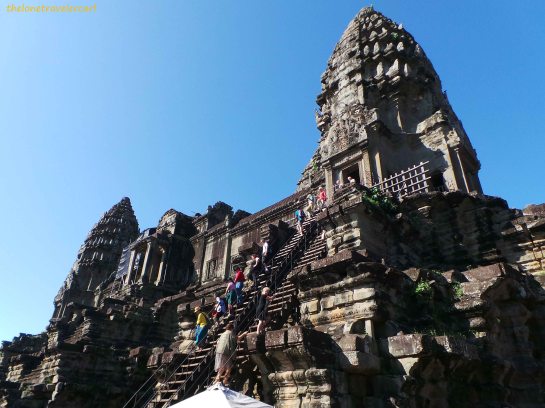 Steep climb to get a better view of Angkor Wat 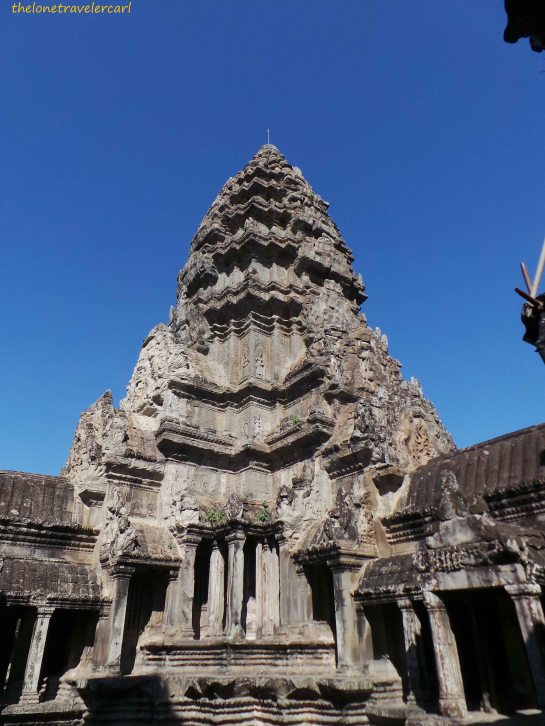 It was scorching hot strolling around this temple. Good enough that the tuktuk driver also provided me umbrella and a bottled water. We passed by Phnom Bakheng and Baksei Chamkrong because it was not in the plan in the first place. We headed to Angkor Thom and Bayon temple. Bayon temple is also amazing to look at. Since the temple’s most distinct feature is the multitude of serene and massive stone faces on the many towers. It’s really hard to capture a decent photo in this type of location wherein it was jam-packed with numerous tourists. But, I got some good ones.

On our way to Angkor Thom 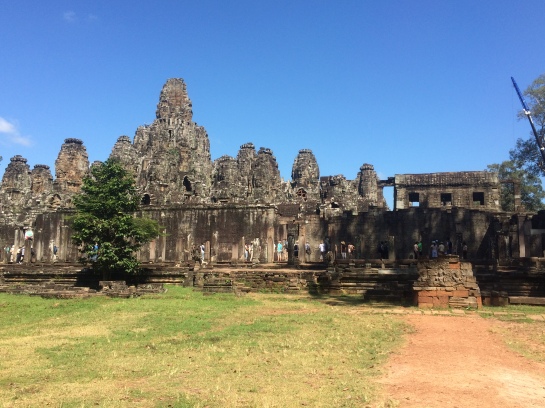 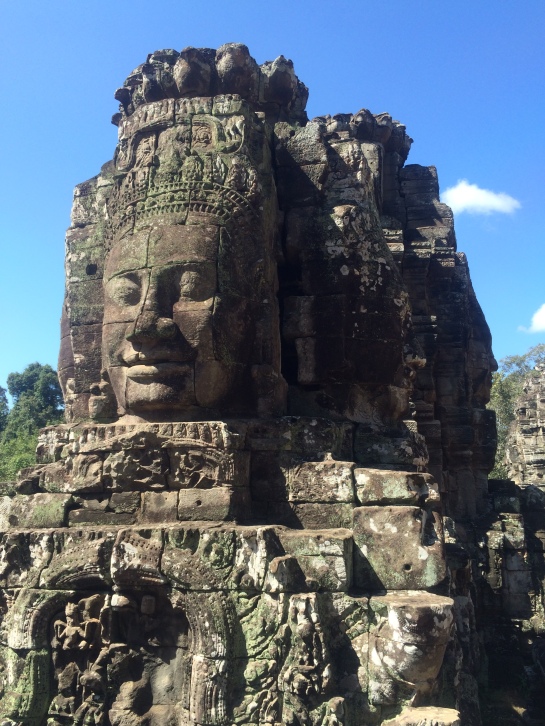 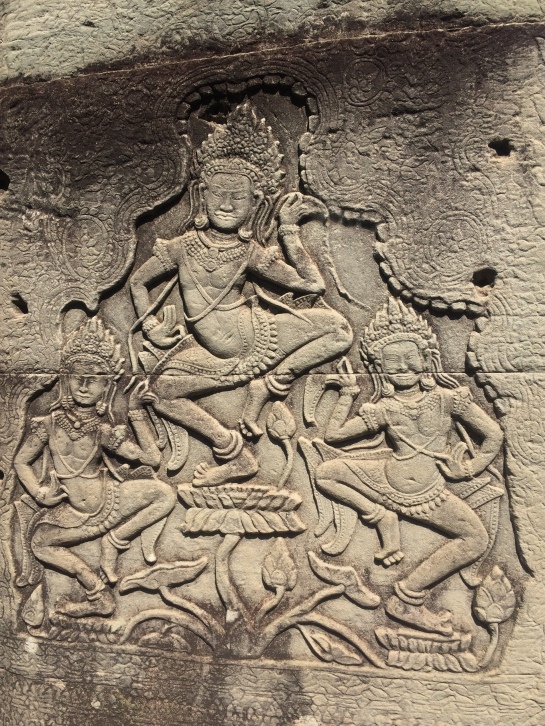 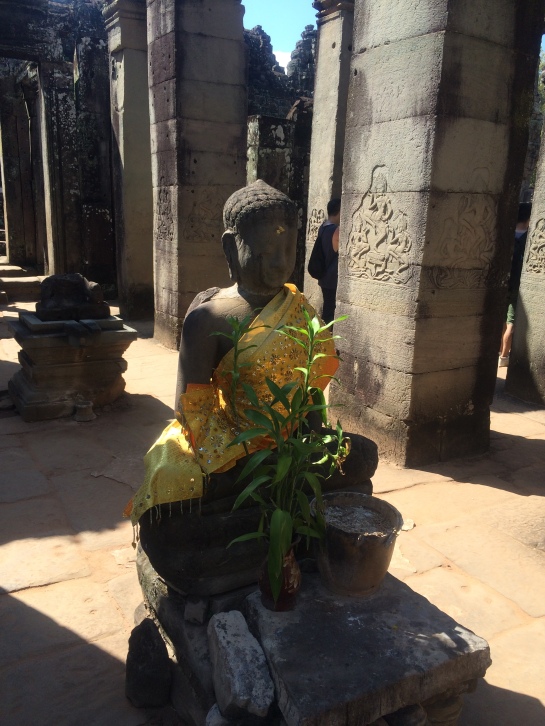 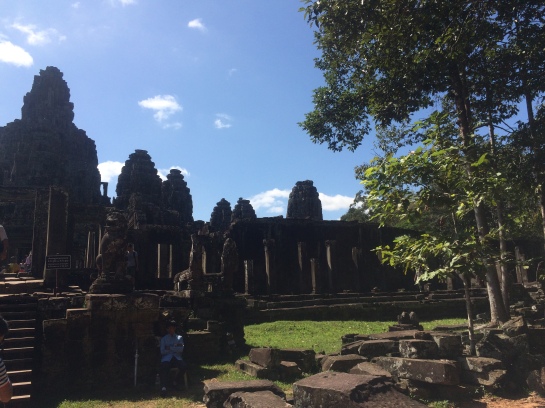 Next attraction was Baphoun Temple. I walked from Bayon temple to get there. This temple looked different as well. It has a unique design. It is a 3-tiered temple mountain built as a state temple. Here I needed to catch some breath since you need to climb the steep stairway to get to the top. The view on top of the temple was great but it was still hot. Not that I complained a lot of the weather being too sunny that day. 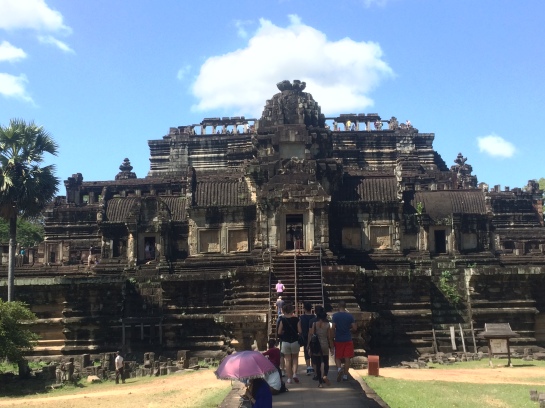 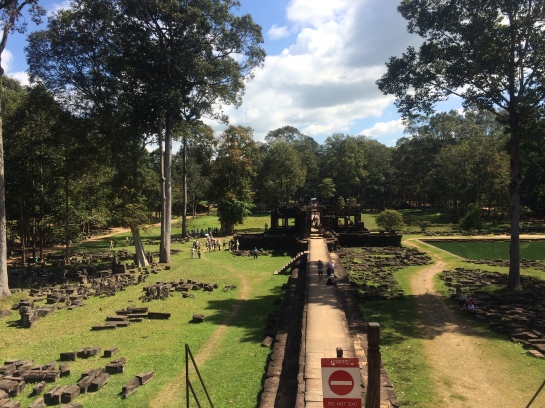 Another stairs to see the view on top of Baphoun Temple 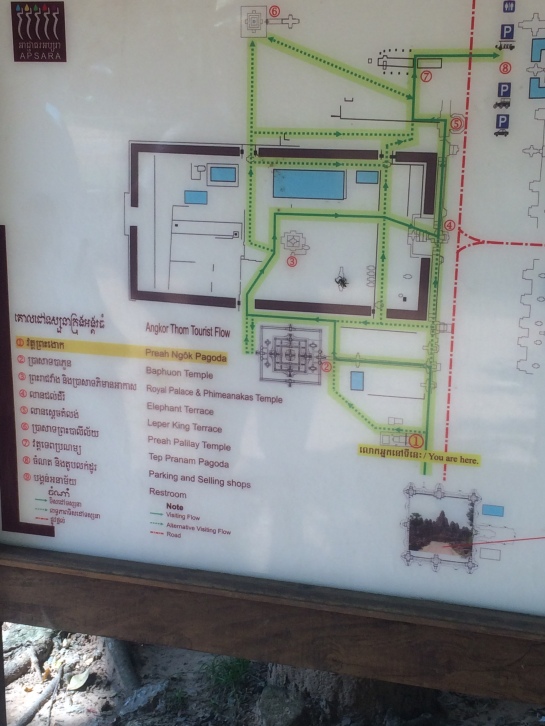 Then I got down and out of Baphoun temple. I was about to go to the Terrace of the Elephants and Terrace of the Leper King but I was exhausted already. Maybe a gallon of water has evaporated from me body. It was also my fault since I refused to take another bottle of water and the umbrella the tuktuk driver offered to me. So, I just told him to go to a nearest restaurant to eat since it was also time to have lunch. 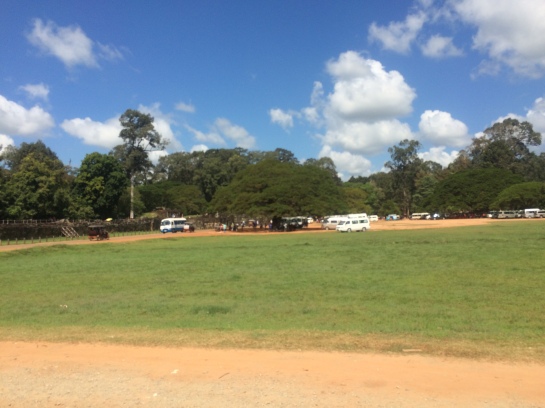 On our way to the restaurant, I saw these views. 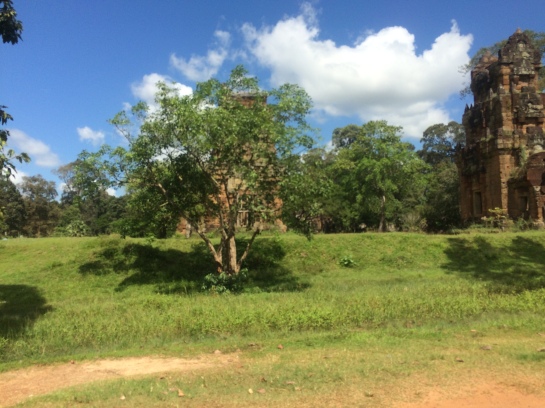 He brought me to Ta Prohm Khmer Food, the price of the foods was a little bit expensive maybe due to its location since all tourists go there to get some munchies and meals. Here, I ordered Fried Noodle with Pork and vegetables. It was delicious. The service was OK, too.

Back to the journey, we went to Ta Prohm. This temple has been known since it was also the same location shot in Lara Croft: Tomb Raider which was starred by Angelina Jolie. Ta Prohm has this photogenic and atmospheric effect with combination of trees growing out of the ruins and the jungle surroundings making it one of the most famous Angkor temples visited by tourists. Too sad, it has been neglected and needed much restoration. But so far, it was also an amazing place to wander since the air was cool and there were a lot of trees to find shades from the glaring sun. 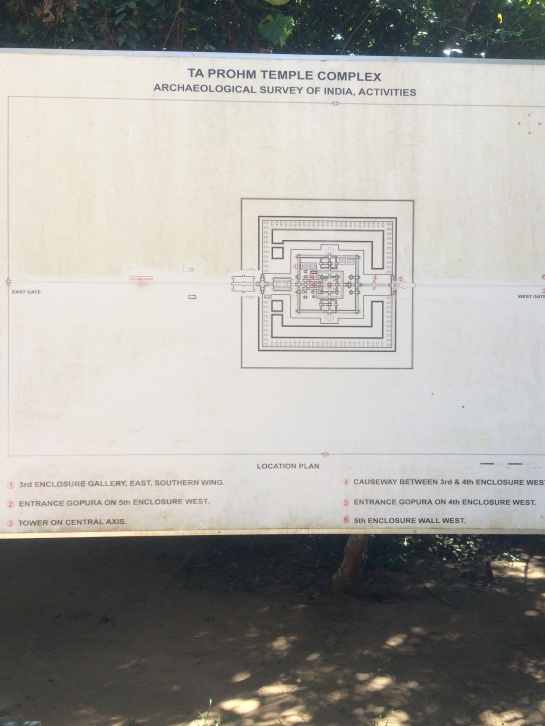 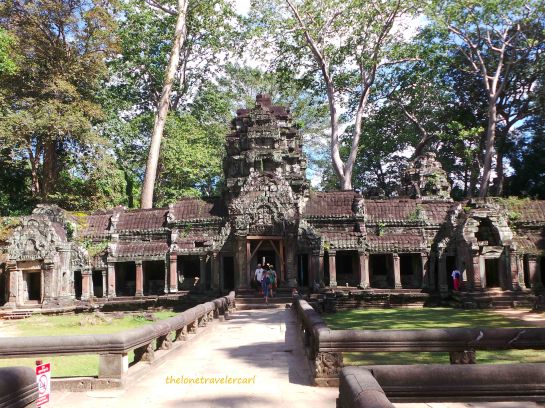 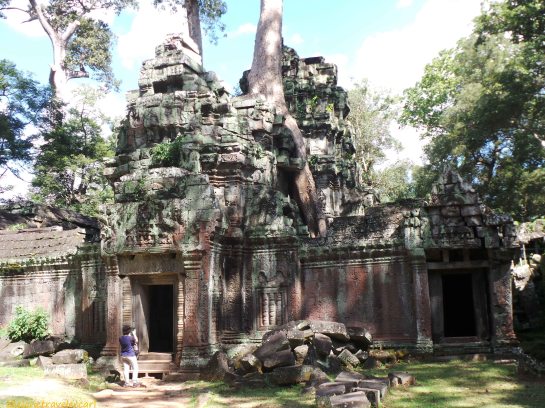 There were still places to visit but I called it a day. I miss so much of other attractions in Siem Reap but my body just can’t handle traveling with so intense heat. I have failed to see Preah Khan, Neak Poan Temple, Ta Som temple, Pre Rup, Banteay Srei, Banteay Samre and Bakong Temple. Maybe next time, I can go back there with someone special. Well anyway, I went back to the hotel and took some rest.

By 1900H, I hailed my personal tuktuk driver to send me to the Angkor Night Market. I did shopping and bought some souvenirs and other stuff. You can haggle to the price you can afford and save a lot.

As a wrap up, my experience in the City of Temples was truly worth remembering. I can tell it to my friends and families. I will definitely advise them to go there and see it for themselves and be mesmerized.

Be a traveler not just once but all the time.

Putheavatei Boutique Hotel and Spa, A Home Away from HomeKingdom of Cambodia, Siem Reap