A Visit in Bang Pa – In Summer Palace

The old city of Ayutthaya has been a very important part of the history of the Kingdom of Thailand. It has been named as the capital during the old days of Siam. Since it has been considered as a historical spot in the country, then there are a lot of features that a traveler would see in this place.

I’ve already shown the old temples in Ayutthaya and now, I’ll take you to the grandiose side of the province. Just few miles away from those temples is a district famous for its magnificent buildings. Located in Bang Pa-In District is the Summer Palace of the Royal Family of Thailand. They spent their holidays, special gatherings or celebrations and when they have VIP guests, they will bring them here. As I walked thru the gates of Bang Pa-In Palace, an entrance fee is needed and visitors should dress up politely. But not to worry if you forgot to bring some decent clothes since they will provide you for free, just make sure to return it after. I was tied up with a tour package so, I don’t have to pay for the admission ticket. Then, they handed us a booklet. It was eventually the map of the entire palace. It was wide and will take an hour or two to explore. The tour guide told us we can rent the golf cart since it requires hours of walking if you want to see the entire palace premises. But I insisted to do it by foot. So, I started exploring Bang Pa-In Summer Palace.

First, I got to Ho Hem Monthian Thewarat. This is a small stone structure in the form of a Khmer-style dedicated to the king of Ayutthaya.

I just spent a minute there and headed to the next attraction which was the centerpiece and the most photograph place of the Bang Pa-In Summer Palace.

I was standing in Gra-Jom Tae, well, there was nothing written about it historically. But as I’ve seen it, it was like a vantage point to see the amazing view of the main attraction of the Summer Palace which were the Phra Thinang Aisawan Thiphya-Art and Tevaraj-Kanlai Gate. It was magnificent like it was floating on the water, showing the reflection as well.

Here are other photos I snapped while I was strolling the palace grounds.

Ho Withun Thasana was built as an observatory with a purpose as a lookout tower for viewing the surrounding countryside.

Phra Thinang Wehart Chamrun or translated in English as the Royal Residence of Heavenly Light is a Chinese-styled two storey mansion. In the ground floor, you can see a Chinese-style throne while on the upper storey houses an altar of King Mongkul and King Chulalongkorn with their queens as stated and written on the guidebook that was given to all tourists upon entering the palace.

The rest after that point were mansions and memorial statues of the Queens, others were gates and houses. The mansions were really built to fit for a royalty. I didn’t have time to take some pictures since I was in awe and I felt like I was in a kingdom in a faraway land.

Passing every mansions, memorial statues, gates, and bridges, I can’t helped but notice how the people were able to keep it green. The entire palace grounds was landscaped well and it was  really amazing. 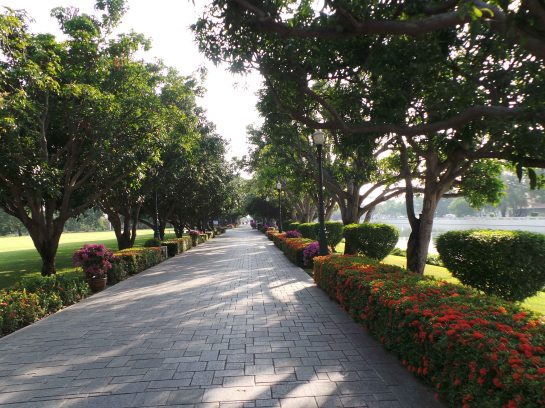 So far, my experience visiting the Bang Pa-In Summer Palace was great. Sure it was a feast to my eyes. Though, it may be short but it was memorable.

thelonetravelercarl
A *traveler/backpacker who loves to see the beauty of what the world has to offer and believes that, '**Traveling is an opportunity to find one's self and enjoy the many things life can offer.' I'll be posting my adventures usually on a Friday due to conflict with my work schedule. NOTE: Articles/ blogpost being published are not all up-to-date, some are adventures a year back, others are a month late while few are up-to-date. Just a heads up, I go by a lot of names. I am used to making up aliases than telling my real name. Meanings Behind Words: **Traveling doesn't mean to go to other countries a lot. It also connotes how he journey his life. *A traveler/backpacker doesn't only mean wandering around with a backpack. It can also signify bringing with him the necessary things, knowledge, values, ideas, perspectives to his odyssey in life.
Recommended Posts
Showing 2 comments

The Historical City of AyutthayaAyutthaya, Kingdom of Thailand